Vega is an Epic Outfit in Fortnite: Battle Royale that can be obtained from purchasing the Season 9 Battle Pass and reaching Battle Pass Tier 47.

Model: Unique
Styles: Yellow, Red, Teal
During Season 9, it was revealed that Vega is a bounty hunter, capturing fugitives and criminals for a bounty or reward. Vega was part of the Season 9 Battle Pass, foreshadowing to players that a bounty hunting mode will be soon released, and it did with "Wick's Bounty," along with the John Wick outfit too. Vega wears a triangular-cut hunting turtleneck, along with yellow bottoms and short blond hair. Although a bounty hunter, Vega continues to follow the futuristic theme of Season 9. 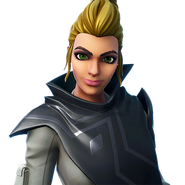 Old Icon
Add a photo to this gallery
Retrieved from "https://fortnite.fandom.com/wiki/Vega?oldid=178482"
Community content is available under CC-BY-SA unless otherwise noted.