A Victory Royale is a Gameplay Mechanic in Fortnite: Battle Royale. It is obtained by being the last squad alive in a standard Battle Royale match.

A Victory Royale is gained by the player when all other opponents in the match are eliminated, or when the objective of the mode is reached successfully. Players will see the banner atop their screen, alongside a slow motion segment on the elimination of the final player / win. Players will then hear their lobby Music, and the match will end.

Victory Royales can be obtained in the following ways: 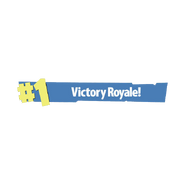 The Original Banner for obtaining a Victory Royale, prior to its updated icon.