The Viking Village was an Unnamed Location on the Athena Map in Fortnite: Battle Royale. 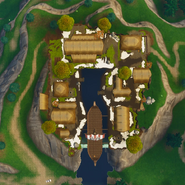