Weeping Woods was a Named Location in Fortnite: Battle Royale. It was added at the beginning of Chapter 2: Season 1. Weeping Woods was a highly diverse area with a lot of trees, a ranger tower, and a log cabin. It had a campground with a river flowing through it. The trees provided lots of wood.

During Chapter 2: Season 4, Wolverine could be found there as a

Boss, who drops his Mythic Claws. As of Update v15.00, Wolverine has gone, and Kyle has appeared, offering bounties and quests. In Update v17.10 Hotfix, Zyg and Choppy appeared there as a Boss. As of Update v18.00, abductor parts have crashed into the far west part of Weeping Woods and has created a landmark called Wasted Woods in the area. Weeping Woods were removed when Apollo flipped over.

Weeping Woods was located on the west-midlands of the map. It was relatively close to Sludgy Swamp, Holly Hedges, and Boney Burbs and more distantly to The Pyramid. 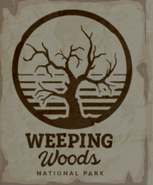 Guardian of the Woods: The Spire

Guardian of the Woods: Hut

Guardian of the Woods: Dock

Guardian of the Woods: Main Building