X-Lord is an Epic Outfit in Fortnite: Battle Royale, that could be unlocked at Tier 1 of the Season X Battle Pass. He is part of the Storm Scavenger Set. 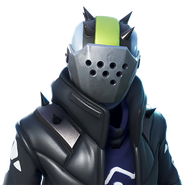