Right after the events of the Story Cinematic of Chapter 2: Season 6, a looper (The player), which Jones recognises from The Device event, is brought into action to help both Agent Jones and The Foundation to help fix the Zero Point. 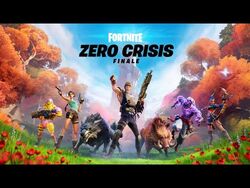 The Looper appears, and Jones recruits them to help him save reality. The Foundation flies up and goes inside the unstable Zero Point. As he starts fixing the Zero Point, reality starts breaking apart and portals appear (Although. The Foundation states they are not portals).

Jones starts to close the portals, and succeeds in closing one - This causes a flower blossom to appear in the sky. The Foundation warns them to watch out for Reality Waves. Jones states "Reality waves can change anything in a blink-" but is cut off as one occurs. This changes Jones into a Rift Butterfly and the player turns into Glyph Master Raz.

The Looper is told to use Jones' Portal device to close all the portals. After closing the next one, they face the problem that the other portals are too far away. Luckily for them though, Jones can teleport them to each one.

As the player/looper and Agent Jones teleport and close each portal, reality waves and events occur along the way. These being:

With the last portal closed, it looks to be completed as a giant flower blossom fills the sky once more and The Zero point begins to close and seal. The colors surrounding it are intense. But suddenly, the blossom starts swelling and turning red and black. The Zero point also separates again with it.
The Foundation states it's not enough to completely fix it, and is left with one last option. he needs to contain the blast to prevent reality from ending, so he forms a tower of stone leading up to the Zero Point.

Jones teleports the looper and himself to the bottom of this forming tower. They run up the side of it as crystals and rocks come out the ground. They then fly up to a staircase along the tower, and run towards the top.
As you reach the top, the butterfly Jones turns back to his normal self. The looper is blasted off the platform to fly and watch as a bystander. The Foundation says there'll be no other chance, and that Jones needs to overload the Device to seal off the Zero Point.

Jones objects saying "Overload the device?! I'll be trapped in the loop!" The Foundation states they'll both have to fight their way back, and that they should not give up. He also says that he will find Jones and that he should tell him everything. Jones says "You have my word!" and overloads the device.
This seals The Foundation in, and The Spire is complete. Thus trapping Jones in the loop for a while.

The Foundation forcing the Zero Point to bloom

The Foundation creating The Spire

Top of The Spire

The Foundation sealing himself inside The Zero Point